I recently facilitated a session where someone shared in the closing reflections that they felt dehumanized. For anyone to feel dehumanized by my actions is, for me, a fail. When I mess up, it’s imperative for me to own it, learn from the experience, act differently in the future, and make amends as best as I am able. My hope is that this public reflection will help me integrate what I am learning and potentially be valuable for people reading this (as I know I am one of many who carries the identities of a facilitator and a white woman). I am committed to facilitating with integrity and humility. Reflecting in depth on the feedback I receive is an essential part of my commitment. What follows is my perceptions and analysis. I’m sure that there is more to see from the perspective of other people who were present.

Perceptions About Power that I had Walking into this Session

When I am facilitating a group, I always hold power in the room. I guide where a group goes or doesn’t go. I hold the actual or symbolic microphone, making decisions about whose voices are heard or not heard. I take up space. I am the center of attention at times. I have influence over what is or isn’t happening in the room. Sometimes I use my power in ways that are contrary to how a person in the room would like the time to be spent. I take very seriously this facilitator’s position of power and influence and strive to use it to make equitable spaces where people are respected and able learn from each other. 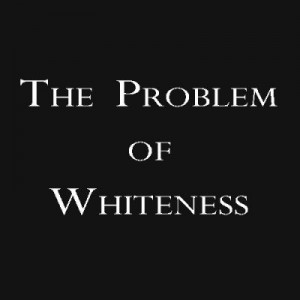 I am a white person and a White Woman. I share these identities with many other people that have historically and still currently hold social power simply because we are white. We act in all kinds of ways, intentionally or unknowingly, that hold us as superior and others as inferior. We have and still do cause trauma and harm towards people of color. Historically (and currently), white folks and White Women had the power of being listened to and believed, our word would be taken as the true word when in relationship with people who did not have as much social power as someone who looks like me. I would be listened to while others weren’t. And many, many folks who looked like me used that power to not only get what we wanted and control other people, but to actually harm other people. When I show up in a room, I am showing up as myself in that moment, and I am also showing up in the image of other people who looked like me and were allowed to be abusive, harmful, and inconsiderate, to name just a few things, towards people who did not look like me.

Another identity that I can embody is that of a White School Teacher, an archetype that has historically been abusive with its power (along with the education system at large). 80% of teachers in public schools in the United States are white and it is well researched that white teachers and the education system that white folks have created have not been fair, kind, honest, or effective in educating students of color (and some might argue all students).

As a white facilitator, particularly when working in a multi-racial setting, I must be hyper aware of my whiteness and all the ways that I am using or releasing my power and even the ways that those who looked like me have used and abused our power in the past.

What I learned in the Experience I Facilitated 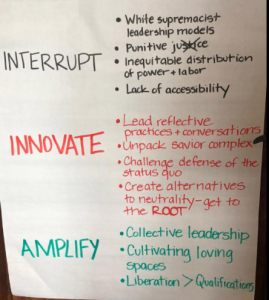 What Happened — The Facilitated Experience

A social justice fellowship hired 3 consultants (a multi-racial team) to guide the Fellows (majority people of color) in a process to co-design the rest of their programming and curriculum with an allocated amount of money to work with. We facilitated:

Session 3 is the session I’m reflecting on here. Our goal was to give the Fellows an overview of a collective decision-making process and then facilitate them through the process, highlighting the process in action along the way so that they could take over the facilitation and facilitate themselves as our contract ended after session 3. In session 1 we asked if anyone had experience with a collective decision-making process. No one raised their hand so we proceeded with the assumption that we would be offering them a process that would be new to them, something for them to experience first hand and then they could choose to use or not use it. We chose a consent-based decision-making process as the tool that we would offer.

Some mistakes that I and we made:

Some comments made in the closing reflections that particularly stood out to me:

I apologized for the mistakes I could see in the closing circle and I will continue to listen for ways that I can make amends for any harm that I caused. And, I think the best way for me to repair from these mistakes is to be diligent in myself about not replicating the same mistakes. I know as a white woman, my whiteness will continue to be revealed to me, and my inability to see how I am part of the problem or perpetuating problems will be illuminated. My prayers are that I keep learning, unlearning and embodying my growth and that I cause as little harm as possible. I know that I am on this journey of racial healing and racial justice for the long haul and I pray that I show up with humility and integrity, contributing in places where my presence is of value and is not a disruption to healing and justice.

P.s. This article was shared with me as a follow-up to this group: Consensus is a means, not an end.