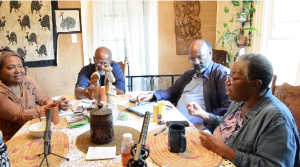 In the summer and fall of 1984, as part of a statewide mandate that the UNC system hire more black professors, Dr.’s Dolly and Dwight Mullen and Dr.’s Charles and Deborah “Dee” James began teaching at UNC Asheville. This year the four are retiring. Here is a great interview and article sharing about their experiences being part of the small handful of African American professors at that University and the legacy that they have created. I have so much respect and appreciation for the Mullen’s (I have not gotten to know the James’). And I wonder what other ways the efforts of creating a colloquium, a community within a community, might be replicated in Asheville? What can programs and initiatives like My Daddy Taught Me That, My Sistah Taught Me That, and YTL Training Program learn from these initiatives of the past?

“James taught a variety of chemistry courses, like molecular spectroscopy, and humanities, and he remembers students writing very comfortably on their teacher evaluation forms that the school needed to “stop hiring just another n-word”.

Mullen taught political science, and he regularly received death threats. Sometimes students would check to make sure he made it home OK.

“I was part of the apartheid movement of ‘88 and there were also klans in Madison County who knew my name,” he said. “I would come in to work and find things plastered on my classroom walls saying ‘go back to Africa’.”

In addition to teaching a couple of classes at UNCA, Dolly Mullen taught night classes at Mars Hill, as the first and only black professor at the school in 1986. She was pregnant at the time. Her husband would never let her go to the school alone, and he would wait in the car for hours while she taught.

The need to address the setbacks and high dropout numbers [for African American students] motivated the four of them as they established the African-American Colloquium in 1991.

Dolly Mullen felt the real problem was a social one, with many black students repeatedly hearing racist taunts at sporting games and on-campus events, she said.

“If you were acknowledged in class at all you were treated as remedial or pointed out as the representative of all the black students in the school,” Charles James said.

It was a bold idea – to require that all black freshman students take additional classes with them with the hope they would have a better grasp on their identity and what they wanted to accomplish at UNCA.

The colloquium include field trips to historically black cities, like Charleston and New Orleans, and included a mentorship component that often led to students going to the Mullens’ home after hours to keep discussing their future.

“I never had a black male teacher before coming to UNCA,” said Gaipher-Eli, an entrepreneur. “So for me to see a black Ph.D. like Dwight and watch the way he handled the classroom, it was like seeing superman for the first time. He was like a superhero to me.”

The colloquium allowed him to access resources he never knew were available and to stay enrolled in school.