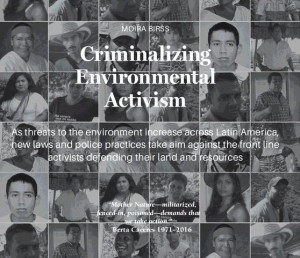 Around the world, including in the US, North Carolina and even Asheville, activists are harmed, harassed, murdered, incarcerated, or wrongly convicted for standing up for the rights of the people and the land — they are criminalized for speaking out for justice and exercising their fundamental rights to free expression and assembly.

Knowing this threat, people continue to risk their lives to protect their people, the earth, and the well being of future generations. These are people who are deeply devoted to the common good and the well-being of people living now and in the future. These are not folks who want to look like they are committed to a better world, but people whose actions and lives reflect their actual devotion.

Today I am praying to those who are now ancestors to guide and protect those who are still alive and are walking this path today. I am praying that more of us will release from the fog of denial, open our eyes to the fact that so many rights are being threatened all around the world and in our own neighborhoods, and find concrete and courageous ways that we can join the struggle to stand for freedom for all. 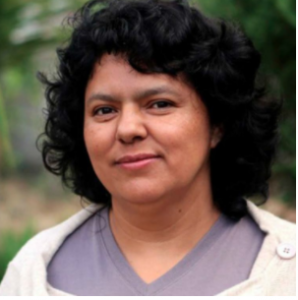 2 years ago today, Berta Cáceres, a Lenca organizer, activist and leader  in Honduras, was assassinated in her home. From 2010-2017 in Honduras, 124 environmental activists were assassinated for their grassroots efforts to defend indigenous rights and the environment, fighting against the Honduran oligarchy and international corporations that are stealing and trying to steal indigenous land to build dams, gated communities, refineries and more. The activists standing up to these government and corporate powers are fighting against the increase in militarism and military spending as education and health go unattended to (sound familiar) and the earth is extracted for profit. They are standing up against patriarchy, homophobia, the stealing of land, and discrimination against indigenous people. They are defending the rivers. These indigenous communities are fighting for the future.

The military force and brutal repression being used against them is funded by US taxpayer dollars, and US companies are profiting from it.

The below video is a beautiful and informative window into this situation in Honduras and a mirror for situations all over the world. These indigenous people are calling on us all to build societies that are able to coexist in a way that is fair, dignified and for life. These are examples of alliances of people coming together to defend rights. “The people united will never be defeated.” Their resistance includes songs, theater, drums, and community.

The question for me these days is not so much “what can I do?” But, more so, who are the people that are with me, sincerely devoted to taking action together for the rights of all people, the well-being of current and future generations? There are many different roles we can play, there is so much to do, not acting is not an option for me.

In honor of the 2 year anniversary of Berta’s assassination, please consider a quick phone call to your House representative asking them to sign the Berta Cáceres Act. Details below.

——
The Berta Cáceres Human Rights in Honduras Act is a landmark bill introduced by Rep. Hank Johnson (D-GA) and currently co-sponsored by 70 Members of the House of Representatives.

Find out if your House Rep has signed it.

The bill states: “The Honduran police are widely established to be deeply corrupt and to commit human rights abuses, including torture, rape, illegal detention, and murder, with impunity” and that the military has committed violations of human rights. Therefore, the bill asks that the United States suspend all “…security assistance to Honduran military and police until such time as human rights violations by Honduran state security forces cease and their perpetrators are brought to justice.”

Note, two of the accused murderers are former Honduran soldiers trained by the United States in Ft. Benning, Georgia, home of the School of the Americas

Please call your Representative NOW and ask to speak to his/her Foreign Policy Aide! Because the bill has been re-introduced, all of the bill’s co-sponsors will need to co-sponsor again! If your representative has not yet signed, call them and ask them to add their support as a sponsor of the bill!

“My name is _____. I’m a constituent from (your town/city) in (your state), and I’m calling to ask Rep. _____ to co-sponsor H.R. 1299, The Berta Cáceres Human Rights in Honduras Act, calling for a suspension of U.S. security aid to Honduras until human rights violations committed by the Honduran security forces cease. Has Rep. _______ seen this bill? Can I count on him/her to sign on? Please call me this week at (your phone number) to let me know if you have seen the letter, and if Rep. _____ will sign it.”

More info about the situation: